UPDATE: Here is an early release of the audio from Friday’s premiere:

Keep an eye on the Imaginary John Cage site for additional mixes.
— 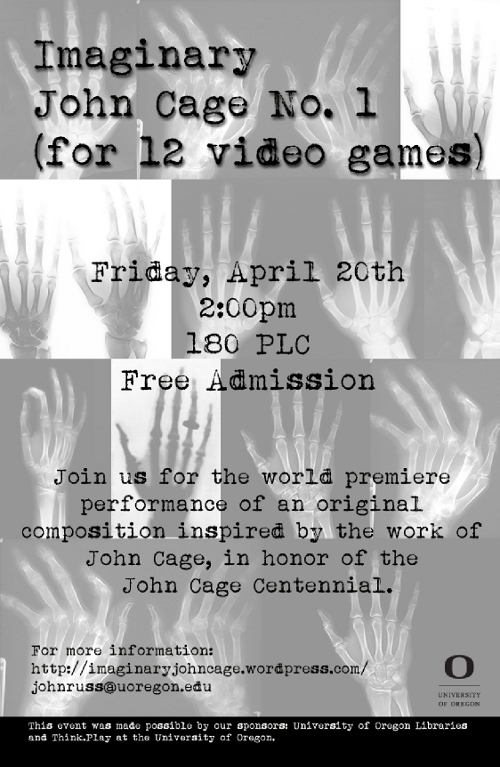 We have some very creative and innovative people here at the University of Oregon Libraries. This week’s evidence includes the upcoming world premiere of an original work in celebration of the John Cage Centennial:

… Imaginary John Cage No. 1 (for 12 video games) is designed to take some of those variables out of our control. Twelve video games / instruments are played, live, by twelve players / performers. Audio from each game is routed into a single audio mixer, and from there to the performance space’s speakers. The score is written for the mixer, and details the volume level of each channel at a given time. (The complexity of the score and the mixer has led us to assign two people to this task, roles that John [Russell] and I will fill …)

The only instructions to the performers are when to begin and when to end. What they do in their individual games, and so what audio is being sent to the mixer, is entirely up to them. The score only dictates which channel’s audio is passed to the speakers, and at what level, at a given time. Further, we allowed the performers to exercise broad discretion in their choice of game / instrument. Similarly, the score does not dictate channel assignment, so theoretically the same performers with the same instruments could produce two vastly different performances by simply altering the audio routing.

Keep in mind that in this conceptualization, there is no visual component. We will hear what the performers are doing according to the provisions of the score; but we will not see. Sight will be reserved for the performers alone, which is another way to say that it is withheld from everyone else.

So, yes, a lot of unknowns to go along with the unknowables…